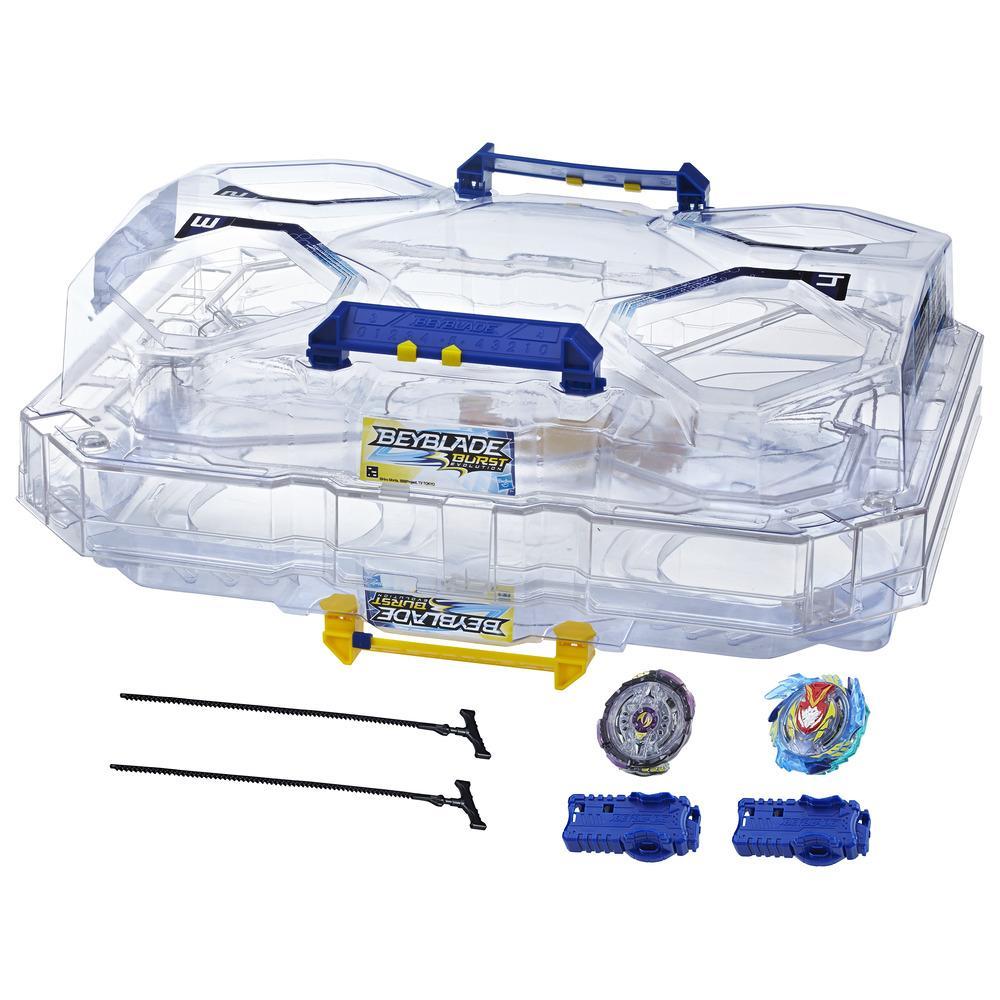 The Beyblade Burst SwitchStrike Battle Tower Beystadium flips between 2 and 4-player modes, each with 2 levels for multi-tiered battling. Unleash exciting face-offs as tops battle from one level to the next. Each mode features updated rules for earning points. First Blader to reach 5 points wins!

Beyblade Burst toys are for kids ages 8 years old and up. This battle pack makes a great gift for fans of the anime series and kids who want to level up on their journey toward Beyblade Mastery.

• NEW 4-PLAYER MODE: Compete to be the last top spinning with a towering battle experience that flips between 2-player and 4-player modes. Battle head-to-head against 1 opponent, then flip the stadium over to battle with 4 players!
• MULTI-TIERED BATTLING: Designed with 2 levels in each mode. Tops can drop to a lower level during battle for exciting 2-tiered competitions.
• 5-POINT GAMEPLAY SYSTEM: Features epic 5-point gameplay system designed for 2-tiered battling.
• EVERYTHING NEEDED TO BATTLE: Comes with 2 right-spin launchers and Beyblade Burst SwitchStrike right-spin battling tops Strike Valtryek V3 and Noctemis N3.
• AGES 8 AND UP: Beyblade Burst toys for kids ages 8 years old and up to collect, customize, and compete! Mix and match Energy Layers, Forge Discs, and Performance Tips to try to find the best Beyblade Burst top combination. Components interchangeable with most Beyblade Burst tops except Beyblade Burst Rip Fire tops. Two-Part Forge Disc compatible with other Two-Part Forge Discs.

• Ages 8 and up
• Warning: Choking Hazard -- small parts may be generated. Not for children under 3 years.
• Warning: Only use Beyblade Burst tops with a Beyblade Burst Beystadium. Do not lean over stadium when tops are in play. Do not use stadium on tables or other elevated surfaces. Tops may bounce up and hit eye and face.
• App available through 6/30/2020. Beyblade Burst app works with select iPhone, iPad, iPod touch – IOS8.0 or later required -- and Android devices. Updates affect compatibility. Check beyblade.hasbro.com for details. Not available in all languages/countries. In app purchases may be available.
• Note: Hasbro is only responsible for Hasbro-generated content. Please refer to third party terms and conditions for further information.